Today I set off with my mother and daughter Florence to see the Caravaggio exhibition at the National Gallery. Unfortunately this time it was the exhibitions last week so my New Year’s Resolution’s is to see the exhibitions before their last weekend, perhaps in their first week! That would be a good thing so that you might be able to take a little from what I have written with you around the exhibition. I am not an academic or a historian. My intention in these posts is just to give a little insight into the visual language of the artists. A little insight so that when you are on Museum trips or when you are drawing or painting at the studio or in your home, you can see the paintings from an artist’s perspective.

Many of the paintings on show are from the National Gallery’s own collection, so there are still many opportunities to see them. The rooms were heaving, which although for selfish reasons is less appealing, is a wonderful testament to Caravaggio and to figurative oil painting as a whole. I’ve never been squashed for space at Tate Modern or visiting the Turner prize, and this isn’t just because of the scale of the buildings!

For sheer number of paintings the exhibition was a little overwhelming but I always chose just to look at a few paintings in each room that grab my attention. As a painter your main job is not to imitate nature but be selective, so to at exhibitions, more often than not the curator is just bulking out the show with numbers, so you too can be selective about which paintings you look at! Though perhaps it’s in seeing the second rate along side the masterpieces that we can better appreciate the masterpieces. It’s also nice to see that even Caravaggio had his off days!

One of Caravaggio’s key skills, is that his paintings often leave a great proportion of the canvas to the imagination, lost in the scuro of the chiaroscuro. The premise of the exhibition was that Caravaggio’s use of chiaroscuro (light dark) and his realism were novel and ground breaking, and that artists from across the continent, even some who didn’t know him would borrow from his style and methodology, traveling to Rome to see his work. Personally I find this overly simplified. Artistic movements and tastes are not created by a single individual, but might be dictated by the patron, a dissemination of many artist, and other art forms. It is no coincidence that the birth of opera happened around the same period- a dramatization of music and drama, both on the stage and on the canvas.

Though I liked the fact that the narrative that went alongside the exhibition was not wordy or overly intellectualised. In the rooms there was a clear painting to grab ones attention, amongst lesser works. In the first room the painting by Caravaggio of a Boy with a Lizard is so fresh and alive. Here he really is showing off his skills, the beautiful still life, the portrait, the wonderful chiaroscuro and the paint quality which is exquisite and controlled and yet the image is so dynamic and lively.

In the second room, despite knowing the painting so well, I was again thrilled by the supper at Emmaus. I asked my daughter if she noticed anything odd about it; I wanted to see if she could spot the misjudged proportion of the hand in the distant, she did notice that his arm looked too short, which is another way of saying the hand was too big. She also thought Jesus looked rather feminine but what really struck her was the feet on the roast chicken! Even Abel and Cole while including the giblets and necks, always remove the feet!

In the 5th room Caravaggio’s paintings are hung next to Giuseppe Ribera’s work. Ribera is one of Scott’s favourite painters, and it is obvious to see why. Where Caravaggio’s style is slick and punchy, Ribera is powerful and emotional. Caravaggio is an amazing artist and image creator, but there is no doubt that Ribera has a greater mastery of paint. The paint quality of a Ribera is astounding, the chiaroscuro just as powerful but the naturalism so much greater than a Caravaggio. The emotional impact and the fleshiness he achieves is awesome. 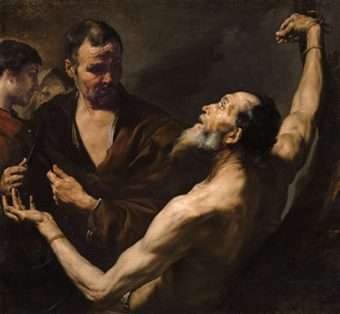 In the final room the Gerrit van Honthorst has a different sense of chiaroscuro, although it is all about the light, the palette is so much softer, and this lends to the tenderness of the subject. And there are so many other artists to mention, like Georges de la Tour but the blog would get too long!

Instead as it is a Caravaggio exhibition I will leave on his painting of Saint John the Baptist. The cleanness of his shadow shapes and the clarity of his images are unrivalled in painting. He is a wonderful painter to look at as an aspiring artist and as a resource for a teacher. As we tend to want to overcomplicate and over-explain our images, his simplification of value patterns and clarity of colour notes and shapes are such a good lesson for us all.