Yesterday I went to the Howard Hodgkin portrait exhibition at the National Portrait Gallery. It would not be my show of choice but a dear friend absolutely loves his work and wanted to take a couple of us to see his work.

She was right to bring us; it was so lovely to go to an exhibition, which was just about colour and feeling. A disregard for representation and shapes and why not? If the colours and patterns of shapes work together and balance, which with Hodgkin they do, then the abstraction is rather refreshing and liberating.

This portrait of Peter Cochrane is the most figurative. I love the bold colour and patterns!

Most shows zoom through an artist’s life chronologically or within subject matter. Here the show started with one of his later pieces and most abstract. It really helped put the rhythm of the subsequent paintings within a context: Seeing the end to understand the beginning. In his painting Absent Friends, is the title ironic or is it even prosaic of me to think that? 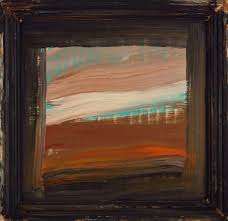 During the war as a young boy, Hodgkin was an evacuee to New York City thereby having the opportunity to visit MOMA and be in a city not focused and devastated by war. This must have been a huge influence. What sort of an artist he would have been if he’d been an evacuee to Wales like my father?

On returning to England he studied at Camberwell under the tutelage of Coldstream. I love Coldstream’s paintings, not least because I was lucky enough that my dining hall at school was hung with Coldstream paintings, (apparently he partly paid the school fees with paintings).

So as with NYC and Wales… I wonder how my artwork would have differed if it had been Hodgkin’s paintings informing every mealtime rather than Coldstream.

With all of Coldstream’s measuring and observation, what they would have thought of each other. 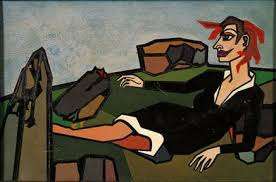 After Camberwell, Hodgkin went to study in Bath where the tutors were much more open to his ideas. Ironically the examples the NPG showed of his time in bath were his most figurative, some of the most wonderful and powerful portrait drawings in Pencil from around 1953, with a strong use of line and mass. I’m sure Coldtream with all his meticulousness and measuring gave Hodgkin a thorough grounding, to help the leap into abstraction.

His philosophy on the abstraction from the figurative portrait is equally applied to his use and deconstruction of the frames. It is very playful.

To choose a favourite would be difficult, though the one that sticks in my mind is probably one of the most figurative. I just found the character leaning over very enchanting and the colours so refreshing. Perhaps it is its figurative nature that makes it memorable to me. 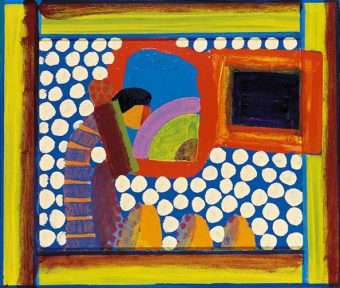 If the paintings are about a response to people and memory, I would ask if he either has a very rich visual memory, or are his paintings an emotional response to the memory? – two very different things, and in my mind, the latter easier to access.

I wonder what was going on in his mind? Was he being playful or utterly sincere? I do hope a little playful, as this would give the work some freshness and would take away the pretense of some of the written word!

If you do go and see the exhibition it is a wonderful tour de force in colour and colour combinations, in patterns and juxtaposition of shapes.