This morning I got up early to set off on my first artistic and cultural adventure of 2017, accompanied by my daughters. We left Broccoli behind as, although she loves our arty escapades, Museums are less welcoming to furry friends.

We drove to Oxford, with Rene Aubrey playing in the background. Driving through the city, waves of nostalgia washed over us – the architecture and familiar street names have inspired some of our greatest literature, most gripping murder mysteries and characters.

We arrived at the Ashmolean in good time. The building was recently renovated and boasts light and airy modern spaces. There is much to see, too much and for this reason we decided to focus on just one floor. We will have to return for the other floors and to revisit our favourite paintings.

A whole room is dedicated to Dutch flower painting. We felt spoilt by the number of paintings and whilst it was a treat to have so many masterful examples of the genre in one room, by the end we were able to be quite picky about what we enjoyed and what we felt was overdone and overwhelming. 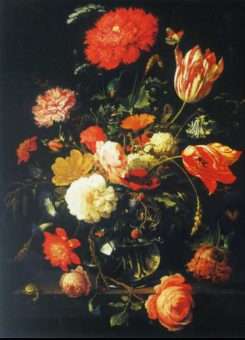 We concluded that the paintings just marginally under life size did not work, they looked mean and disproportionate rather than merely under life size. There really is no need to paint something as small as a flower under life size, and it doesn’t make visual sense. Obviously this is not a rule that holds true to all subject matter, for a building to be painted life size would be ridiculous!

The lighter backgrounds were fresh and stood out amongst all the dark backgrounds. Why were Dutch flower paintings predominantly painted on dark backgrounds? Fast forward to the delicious Colombian feast we went onto after the Ashmolean. It was served on typical dark Colombian pottery, which Maria considered an effective way of emphasising the colour of the food. It made me think of the Dutch flower painting – perhaps the dark backgrounds were a device to accentuate the colours? Then again, in the days of no artificial lighting, I would have thought it would have been brighter to have lighter images?

My daughters were fascinated and did a great job finding at least one bug in every painting, like an arty Where’s Wally. I wonder, were the bugs there to entertain the artist, the children, or help explain the freshness and aliveness of the flowers!?

From flowers to landscapes, we moved through two rooms dedicated to the landscape sketch, mainly from the Gere Collection. These paintings are always a delight to see, their freshness and purity – no bugs needed, just pure observation. Leighton’s sketches are uncluttered and utterly underworked (very different to his large paintings); Valenciennes’ colours and shapes are crisp and simple, almost modern. Here too we were spoilt by the number of paintings and yet, by the end, similarly judgmental and quick to comment on the lack of accurate perspective. There is a clear difference between exaggerated perspective, which helps give the effect of distance, to forced and misjudged perspective. 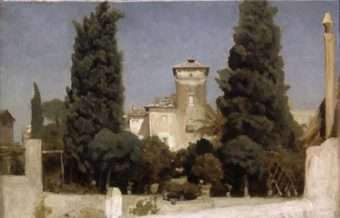 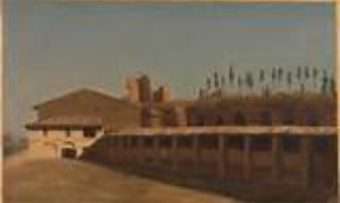 The Constables were at the end of the room and had great impact. I am a huge fan but on closer inspection and after the light sketches of the Roman Campagna, they were disappointing.

The last room we entered was much more eclectic both in terms of timeline and genre. The jamboree of images did have some advantages as it made it very easy to pick out the gems in the crowd! The portrait by Lawrence, on a bone ground was striking and particularly remarkable for its colours and simplicity.

In the same room was the most amazing Hogarth sketch, a small oil painting on canvas. It is phenomenally modern, if it weren’t for the style of dress one would think it was a Walter Sickert. The painting is a sketch for the final episode of Marriage à la Mode; the looseness of the paint and the melting edges are incredible. However, what really brings the painting into the 20th century are the pure colour notes thickly applied, and the use of impasto to guide the storyline. 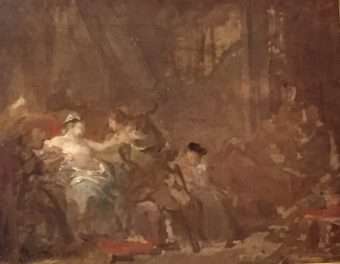 The painting feels very free, today we would be astounded by the sureness of touch and paint quality – alla prima at its best. Yet for Hogarth it was just a preliminary sketch!

There is so much more to be said – and this is just the second floor! However, my account would not be complete without indulging in what was the greatest pleasure of our visit: the Van Dyck studies. Two preparatory sketches of bearded men both in ruffs on a grey ground that brings a delicious warm tone to the work.

Van Dyck uses a very limited palette, his colours are clean and direct and every brushstroke has a purpose. This is not painting sketchily, nor slowly finding your way round till the end fits in with your visual start. It is instead considered and carefully applied so that, every brushstroke makes sense, in terms of its shape, value, temperature, colour. In these paintings there is nothing to trick us or lure us; no flashy colours, unnecessarily thick paint, or layers of glazes; no dripping paint or splashy backgrounds; just the purest form of honest painting. Every brushstroke is purposeful and none is excessive.

As an aspiring painter, what more could you hope for than the purest distillation of paint, and a lesson to apply to more aspects of our lives than just art!

The post Ann’s Out & About – The Ashmolean appeared first on London Fine Art Studios.